Topher Hoffman: Hello Jamie.  Thank you for taking the time to answer a few questions.  Can you tell us a bit about yourself? 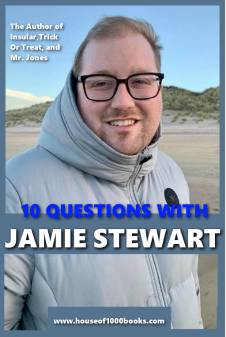 Jamie Stewart: Hi, it’s my pleasure.  Well, I live in Northern Ireland with my wife and our two dogs.  I am twenty-eight years old and I love to write.

TH: That’s awesome! Many kids have vivid imaginations.  Running around all crazy fighting ninja’s, imaginary friends who only they can see, and monsters under the bed that your parents told you weren’t real.  Were you a kid like that, and if so, do any of those ideas show in your writing? If not, where do you get your thoughts?

JS: You’ve just described me as a kid.  I was always an imaginative child and I lived more in my head than anywhere else. It was actually because of this that I was reluctant to read initially because I couldn’t sit still enough to concentrate.  My mind was always going a thousand miles a minute creating games to play with my friends or reacting scenes from films. Because of that energy films became a fixation first. They nourished that massive imagination in my head.

Recently, I watched an interview with a director about his childhood.  He said that when he would go to the cinema, he would become inspired to make films like those that he saw.  He wanted not just to film stories like the ones he saw but replicate camera angles, music and dialogue. In other words, he was inspired by the mechanics that created his favourite films and wanted to learn them in order to do the same.  I was not like that. Films for me were windows into other worlds. Worlds like Star Wars, which became imprinted in my head and I would run around for days afterward pretending I was a character in it. I didn’t care about the tiny things like locations or special effects.  I was in awe of the bigger picture, a bigger canvas, that needed imagination to create the worlds I was seeing on the screen. That’s why writing appeals to me. I love cinema to this day but as a writer you have no limitations, no rules. You can create as big as you can dream

TH: Some people get into writing at a young age, others when they are later in life and start going through a mid-life crisis.   When did you get your calling?  When did you not hold back anymore and have to share with the world your stories?

JS: I started to write at the age of nine before I fell in love with reading.  Even to me, this seems odd. As I’ve already said I spent a lot of my time in my head, all kids do.  The difference for me I discovered was when I’d play a videogame or go to the cinema with my friends I’d relive it for hours, days even weeks after.  They didn’t. When I started to write it was partly inspiration and partly frustration. I found that I didn’t recognise anyone in all those games and movies.

It became a common thing for me to say to my friends if only that would happen to us.

That’s when I discovered the Goosebumps series by R.L Stine.  My friend had a copy of some of his books, the ones with the really colour cartoonish monsters on the covers (how

could I not be interested in them). Again, I struggled to sit down long enough to finish one but what I discovered was I recognised and empathised with the characters in them.  They were all young kids or teenagers and the idea that they could fight off a horde of zombies or Dracula unlocked a door in my head. If they could do it why couldn’t I?

So I started to write stories.  Those first few years were just exercises in recreating the things I have seen or played.  And as I wrote them, I realised that my writing quality was nothing like the Goosebumps books.  Writing and desire to improve lead me to become a reader. I soon fell in love with books after that, it just took the right one.

My decision to publish my stuff came from a place of frustration as well.  My writing had progressed and I wanted to have feedback from people that weren’t in my social circle.  Again, this was out of a desire to improve but also to see if an audience would not only enjoy my work but also love it.

TH: With all your reading, you must find inspiration from many other authors.  I see you reading all the time.  If you could meet any character from one of those books, who would it be and what would be the first question you would ask him after hello?

It’s difficult to choose one character.  I’d chose Death from the Discworld series by Terry Pratchett and ask him if he would like to accompany me for a curry.  I think you’d have some pretty interesting conversation with him over a meal.

JS: As time goes on you end up picking up many different tips, ups and downs with your writing, and faced with many challenges and triumphs.  If you could go back in time and meet yourself, what would you tell yourself to encourage yourself about your writing?

Don’t take the job so seriously that it becomes a negative.  Of course, if you want to be a writer, you should be serious about what you write but it should always be fun.

TH: You and I have talked before about your writing. Do you have anybody in your family that doesn’t like your writing? How do you know?

JS: Not really. I have people in my family that don’t read, yet still support me.

TH:  Now on to your short story. Your short story Insular is amazing! I’ve read it and reviewed it and gave you a big whopping five starts.  Could you tell us where and how you came up with the idea and if there are any hidden meanings in it?

JS: I used to work in a home delivery department for a retail company.  The job of picking groceries for others is very monotonous but also time orientated.  We had to work fast in order for the first set of vans to leave in the morning. I noticed I would go a whole two hours without actually speaking to my colleagues.  When I realised how rude

I was being, I then noticed that everyone did the same thing. We didn’t socialise with each other, not when we were on the shop floor. I also noticed that if I was asked I knew where almost every item was on the shelves.  I could do the job as if from muscle memory. As I was pondering this and pondering what did everyone think about as they worked from aisle to aisle an image popped into my head. It was of security footage of two people in a grocery aisle and if you peered closely you could see straight through one of them like a ghost.

My brain made the connection between how much my colleagues and I were spending in our own heads and the idea of being a ghost.  I was also noticing at the time how people would fall into their phones despite being surrounded by colleagues and friends. It made me consider how as a society we have the tools to be more connected than ever in human history but how we are actually more isolated as individuals than ever before. Insular sprung out of that.

TH: The characters in the story were well done, are they based off anybody in particular? If so who? If not, where did you come up with the idea to make the characters the way they are?

JS: Thank you, it’s lovely to know that they connected with you.  They aren’t based off anyone in particular. Insular was a turning point in my writing career because it was the first story that I didn’t plot before starting.  I had the image of the security footage in my head and I had this idea that the main character, Peter, would narrate the story as a man in his seventies looking back to a particular time in his life.  I found out the rest as I wrote. It was easy to do as I was living the life of these characters, one that was very unfulfilling.

JS: I don’t think you can set out to do that.  You can’t set out to create the best hero or villain ever written.  I think the best way to write a story is to let your characters be free to do what they want to do.  That way they will surprise you and hopefully readers too.

A lot of the response I have received from people over the character of Julian Kensi is that he is a creepy villain.  I never set out to make him a bad guy, I set out to tell his story. I actually feel sorry for him and I think why he creates that reaction in readers is because they recognise him and his struggles.  Of course, Julian’s reaction to his struggles is not something many can recognise thank goodness.

TH: Finally, I know you have done very well on your last story Insular.  I know the people reading want to is next for Jamie Stewart!  What’s next Jamie?  Give the fans what they want!

JS: Well, since the feedback from Insular has been so positive I’ve been inspired to write more short stories.  My latest one will be released somewhere at the end of March beginning of April time. It’s called Trick Or Treat, and it’s more of a traditional horror vibe than Insular.  Though, in saying that it’s traditional in the sense that it throws a particular horror standard on its head.

I am also currently sitting on a finished novel called Mr. Jones that I will be releasing sometime later in the year.  It’s a coming of age story set in Northern Ireland, and it’s about books, music and friendships and how they can affect a person’s life.  It’s a very different genre from my short fiction, but I’ve never felt like I have to keep in one lane.

If you are you interested in checking out Jamies Stewart’s short story? Check it out here:   Insular: A Short Story of Horror.

Like Loading...
‹ Why You Should Read Murder for Christmas by Jo-Ann Carson
11 Questions with Jackson R. Thomas Author of Paradise, Maine ›

This site uses Akismet to reduce spam. Learn how your comment data is processed.